Our crazy foray into the Outback began with more time in airports and airplanes than I’ve ever spent. After the brief puddle-jumper flight to Vancouver, B.C. we boarded our flight for Australia.

16 hours later we arrived in Brisbane in order to catch a flight to Sydney, before then catching a flight to Cairns (a town on the Australian east coast). Which means, with the time changes, we got on a plane in the US at 8pm on Saturday night. We reached our first destination at 9pm on Monday night! Time travel! Great Scott! 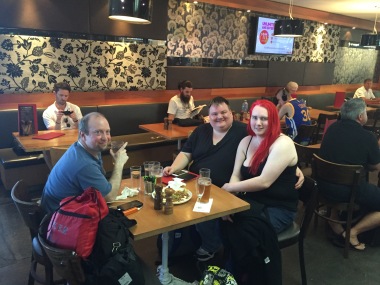 After collapsing at the hotel for the night, we got up early and caught the shuttle to the marina for our boat tour of the Great Barrier Reef. Personally, I’m very nervous when it comes to being out on the water, but managed to work up the nerve to get into the ocean for a little while. We saw the coral and loads of fish, including a few from the cast of Finding Nemo. 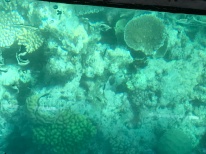 My husband and Steve, on the other hand, loved the water. So they were out much longer while I enjoyed the scenic views of the upper deck of the boat. It was a clear, sunny day, just perfect for it. Which was very fortunate considering the thunderstorm that rolled in a few hours after we got off the boat.

The three of us grabbed some dinner downtown. My husband and Steve (again, far braver) also sampled some of the local delicacies. On the Bill of Fare: Barramundi (a kind of regional sea-bass), Crocodile, Kangaroo, and Emu. I decided to stick with Shrimp, though I’m told Roo can be tasty. I’ll live with the mystery.

We then flew to a place I had always dreamed of visiting, Sydney!

Naturally, we made sure to visit the Sydney Opera House. We took the full tour, learning the history of the conception, construction and history of the famous building. It was a lot of fun though, I must say, the Opera House itself was a much more practical building than I imagined. I guess, for some reason, I envisioned something like the royal opera house of Paris or Munich. Elaborate structures with paintings on the ceilings and velvet curtains. Instead, it was a modern marvel, practical with a major emphasis on function over aesthetic compared to its European counterparts. Given that it was completed in the 1970’s, the modern nature of the building makes a lot more sense.

The next day in Sydney we went out to explore more of the city. As anyone who knows me will be anything but shocked, our wandering led to a wine bar. Along with some delicious native wines, they served an amazing fondue. The first course: goat cheese with chaarcutere & the second: dark chocolate with fruit and sweets. We basically ended up with the room to ourselves and the staff matched Australian wines to all the foods we were trying. All three of us love wine tasting so that was a lot of fun and we got to relax and marvel at the fact that we were actually trying Australian wine in Australia with Australians.

Steve did not accompany us to New Zealand (some nonsense about “going home…paying bills…fired if I’m not back by Monday”), so that was just me and Cam on that portion of the trip. We started our Kiwi adventure with a tour of the Glow-worm Caves.

After a pretty hike through the hills, we were taken into a pitch-black cave and put on this inflatable raft. The group floated down the river running through the insides of the caves. Looking up, at times it was like looking at a starry-night sky with a slightly blue-green glow to it. A glow-worm is itself like a small caterpillar, smaller than most fishing lures, and the bio-luminescence is meant to attract food. I wasn’t crazy about the bug, part, but the visuals were certainly something to behold.

Going into the cave was a bit of a trial for me, as it was narrow in a few places and I can get a touch claustrophobic, but I am glad that I did it, as it was certainly a unique and beautiful experience.

Then we went to my favorite part – Hobbiton!

On a working farm a couple of hours outside of Auckland is the original set for Hobbiton, home town of the Hobbits from the Lord of the Rings and The Hobbit film series. 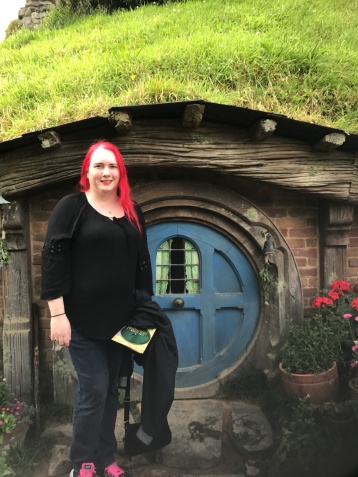 We managed to grab tickets to the evening banquet tour and it was AMAZING!!! We took an extended evening tour of the shire, got tons of photos and heard fun stories about the movie set and filming. The story of the discovery of the filming site was fascinating enough. A scout wandered onto the property on a random farm on a Saturday. Fortunately, it was halftime during the Rugby game and the owner opened the door. The scout was allowed to tour the property and found the three things Peter Jackson was looking for: a lake, a tree, and of course, hills.

The scenery itself was beautiful. Each of the Hobbitt Holes had a different theme, noting the different jobs each of the inhabitants would have done (gardener, bee-keeper, fisherman, post-box artist, etc.) We also got to see Sam’s House, the Party Tree, and Bag-End. After the tour, we went into the Green Dragon and tried some ales that were made specifically there (I brought home a bottle of Southfarthing Cider and Middle Earth wine). 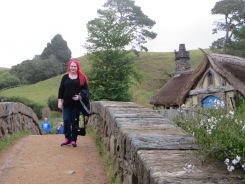 Dinner began with a red-velvet curtain reveal of the Hobbit-inspired feast. Food was displayed like a work of art!

Roasted chickens, fried sausages, beef-and-ale pie, ham-hock, all manner of veggies, and more than enough for Seconds (or Thirds, if you are in the Hobbit spirit). It was also followed by a huge dessert tray with some varieties of New Zealand desserts, which were interesting to try including Kiwi Pavolva (hard meringue, whipped cream and fruit).

Then we got to take the tour back through the Hobbiton set by lantern-light. The entire experience was incredible and we got really great memories captured by some great photos.

I had my conference the next day—the Gothic Association of New Zealand and Australia. (GANZA) I presented a paper on child vampires that seemed well received and had the pleasure of getting to meet a wide range of Gothic scholars whose company I greatly enjoyed. 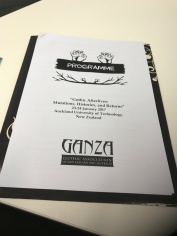 Then we headed down to Wellington, which is on the southern tip of the North Island. I loved the city. It was on the coastline so we walked the beach and had dinner where we could see the ocean.

This began our independent Lord of the rings filming site expedition.

We also took a brief tour of Weta Studios, which designed all the props for LOTR and did the digital work on Golum and and few other main scenes. They also worked on District 9, The Avengers, and the new Wall of China film with Matt Damon that is coming out soon, just to name a few.

While in the area, we spent a couple of nights with family friends who live there. They played tour-guide for two days and took us to the filming location of Mt. Doom. Another beautiful site, and an actual active volcano no less.

And then we spent the second morning at a vineyard, trying some local New Zealand wines.

That’s the condensed version of my trip. I loved it, but it went by too fast!