Last week I went to The Game of Thrones Exhibition in Belfast, Northern Ireland. We started the day early in Dublin, and arrived in Belfast around nine in the morning. The exhibition was held at the Belfast Waterfront and was within walking distance of the train station, so we headed directly there after our arrival.

There were two ways to get into the exhibition. If you had tickets, then you also had an appointed time slot and all that was required was that you show up on time. The second was for those who did not have tickets, which included myself. Tickets for the event were extremely popular and had actually sold out in a matter of hours after their release. So I joined a long line of others who were allowed inside as the building’s capacity allowed.

It took about two hours from our arrival to get into the building, which overall was not bad. It was fairly organized and according to one of the people running the even, just about everyone who had come to see the exhibition was eventually allowed in.

The exhibition featured, drawings, costumes and props from the Game of Thrones television show which were used on set. It included the gowns from Joffrey’s wedding.

Costumes worn by the Night’s Watch

And, of course, Dragons!

It also featured many of the weapons carried by various characters and other props such as jewelry, and goblets. 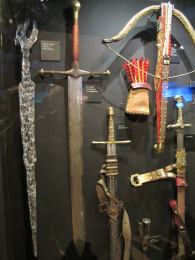 Visitors could climb the wall through the use of virtual reality technology and, of course the highlight, they could get their pictures taken on The Iron Throne where they were allowed to rule all within their sight…for the five to ten seconds they were allowed to sit upon the Throne.

It was a really cool experience. I am a fan of both the novels and the show, and to see the costumes up close and to see the amazing level of detail which went into the making of each and every piece really helped to bring the show to life. If you are a fan and fortunate enough to live in one of the cities where the exhibition will be coming, I would highly recommend visiting.