For those who don’t know, in addition to being a writer, I am also a PhD student writing my dissertation on vampire fiction. Therefore, I had a truly amazing opportunity the evening of Sept. 30th, 2014 to have the privilege of attending the red carpet premiere of the upcoming film, Dracula Untold. It was my first time to ever attend a premiere and the event which was held in Dublin, Ireland had all proceeds going to charity. The event did not disappoint and I was thrilled to be in attendance!

Arriving only a few hours early, I was pleasantly surprised to find myself at the beginning on the line, close enough in fact to stand directly in front of the walkway which the stars of the film would later walk down. 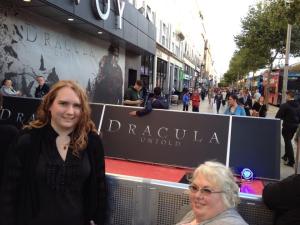 Though a bit chilly, it was interesting to watch the red carpet being uncovered and the slowly gathering crowd. The doors for the theatre opened around 6:30, an hour before the film was to begin, however I chose to remain outside for another half hour, give or take, to see if I could catch a glimpse of the cast. My efforts were rewarded as, a short time before the film was to begin, the star of the film, Luke Evans who plays the title role of Dracula, greeted the crowd as he walked down the red pathway.

I was even more surprised when he paused to say hello and signed my poster, which will from this point forward remain under lock and key. 😉

I enjoyed the film as a fun twist between history, myth and the cinematic portrayal of the vampire. The battle scenes were grand, but not so over-the-top that they became campy, which was nice. They also seemed to embrace (which was confirmed during a Q & A with members of the cast) that they were attempting to put a more human face on Dracula, showing how Vlad might have been seen by some as a hero, as he accepted vampirism in order to save his people from the Turks.

I actually asked Luke Evans about his preparation for the role, which he said included a fair amount of research, and definitely seemed to show in not only the film, but in other questions which he answered during the Q & A as well. They were joined in the Q & A with the director of the film, who provided some fun insight as well.

Overall, I enjoyed the film and had a great time at the premiere!