I recently spent a few days exploring the coast of Northern Ireland. Easily one of the most breathtakingly beautiful locations I have ever had the privilege to visit, the trip was nothing short of amazing. We stayed in a cottage just outside of Portrush a few miles off of the coastline. It was a quaint and wonderful place, just off the beaten path enough to be tranquil.

For this trip, we decided to take a self-guided tour of some of the filming locations for Game of Thrones, the HBO television show based on the books written by George R.R. Martin. As not only a fan of the show and books, but also as one who was lucky enough to get to meet Martin a few years ago, I was very excited to be taking the trip. We began semi-early with our first stop of the day, The Dark Hedges, which served as the filming location for the road between Winterfell and King’s Landing, known as the King’s Road. The location was rather difficult to find, and we actually stopped and asked for directions by a very nice man who actually escorted us up the hill to the location. 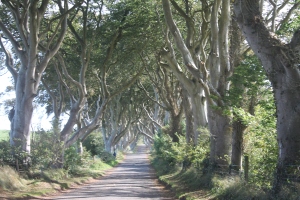 The Dark Hedges consist of a narrow road lined with beech trees which were planted by the Stuart family during the eighteenth century. They were originally intended to serve as a compelling feature to impress visitors as they approached the family’s home. Today, this road remains a truly beautiful site and an impressive location. It is easy to see how it was chosen to be a part of this fantasy series. 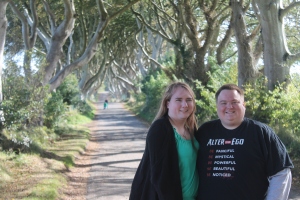 Our next stop was directly on the coast, Giants Causeway. This location is famous primarily for the unique rock formations which line its coast. 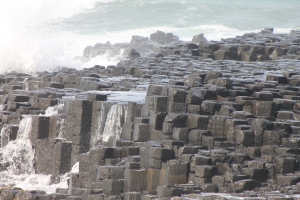 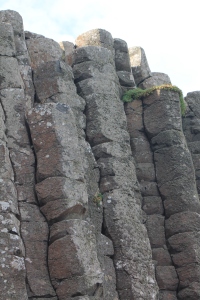 There is a legend that these rocks were actually built by Giants. There are several versions of this legend. 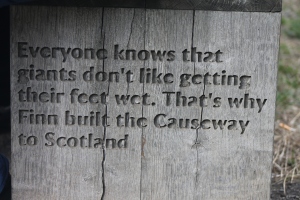 One version is that the Irish Giant Finn MacCool was challenged to fight a Scotish Giant, Benandonner. Finn agreed to the challenge and built the causeway so that they could meet. Some stories say that Finn defeated Benandonner. Other versions say that Finn hid from the Scotish Giant with the help of his wife, who disguised Finn as a baby and tucked him into a massive cradle. When Benandonner saw the ‘baby’ in the cradle, he assumed that Finn must be even bigger than himself, given the size of the ‘baby’, and fled back to Scotland. 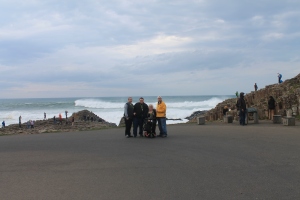 The third stop was Ballintoy Harbour, another Game of Thrones filming location on the coast. This is the spot where Theon Greyjoy returns to his ancestral home, the Iron Islands. (also, where he was baptized to the drowned god) 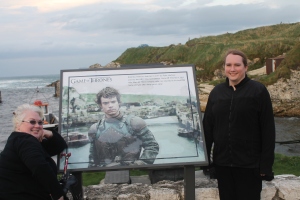 It was an absolutely stunning coastal view, and the cold wind whipping across the sea just added to the authentic feel of standing before a truly amazing sight. 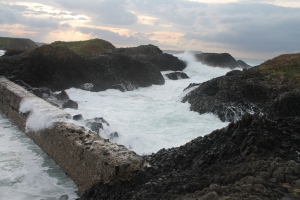 The next day, we took a break for the Game of Thrones tour to visit the Old Bushmills Distillery and did a little whiskey tasking, which was fun…for my husband. I’m not much of a whiskey drinker. More of a “grapejuice” kind of author.

Then we drove back towards Belfast, where we spent our last day touring a little bit of the city and walking through the Titanic Museum. The ship was built in Belfast and actually began its tragic voyage in Northern Ireland, doing proving runs before finishing interior construction and departing for Liverpool. The museum is a collection of information which allows visitors to follow the story of Titanic from its original conception to the original design drawings. 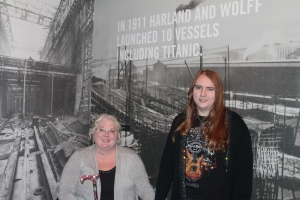 From there, it follows the actual construction steps involved in building her hull, outfitting her engines, and putting together her luxurious interior. The tour finishes with the events of the tragic night the ship sank into the sea, and the aftermath of the disaster, complete with a list of names of those lost. What also amazed me was that the victims ran the gamut of social classes, from tradesman, to crew members, to millionaire industrialists. I have been on the tour several times and still find myself standing with a deep sense of reverence towards the memorialized site.

Overall, the trip was nothing short of amazing and a reminder of how, even after my extensive travels, the Irish and Northern Irish Coasts remain one of my absolute favourite places in all of Europe.

One response to “Northern Ireland & Game of Thrones”