I spent the weekend on a trip to Boston, where I was a speaker at the 26th annual American Literature Association Conference. It was my first time in the area, so I was excited both for the event and the trip itself.

I spoke on the panel titled: Nobody Understand Me:Evil Kids in Children’s Literature along with four other wonderful speakers, focusing on a variety of aspects, including both film and literature representations of the darker side of children.

My specific paper was well-received and I really enjoyed the lively discussion which followed both during the Q & A and at the following lunch, where everyone gathered in a nearby park for sandwiches.

I also attended several additional panels, including speeches on the work of Octavia Butler (I’ve completed some work on her novel, The Fledgling), Ellen Glasgow (a ‘southern gothic’ author), the Victorian afterlives, and for fun, a panel on detective novels — among a few others.

I also walked around the Boston Library which was very impressive and located directly across the street from the conference location. I had a chance to speak with fellow authors and scholar on any and all aspects of our shared loved of literature.

After the conference was over, I scheduled a few days to travel through New England. First, we went to Salem, Massachusetts  and explored the town. A few of the houses date back to the 16 and 1700s, which was really cool. My father, who made the trip with me, is a big American History fan so he was loving exploring the history of both Salem and the area surrounding it. We also saw a few things focusing on the witch trials and explored a bit of the history in that regard as well. 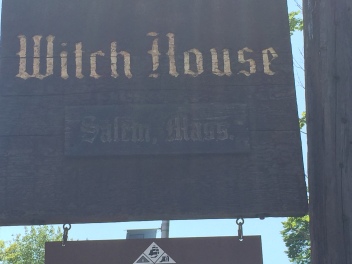 Then, walking down the street famous for it’s witches, leave it to me to find…a vampire! So of course, I could not resist having my picture taken with him. 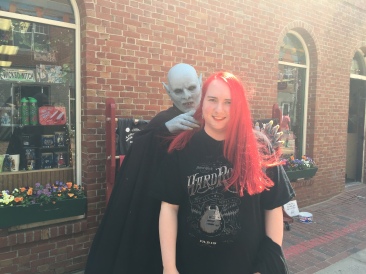 Then dad and I decided to take as side-trip from Massachusetts to Maine in order to visit the Portland Lobster Company. It is a small building, super-crowded where people order their lobster and then wait a solid hour before being given a seat at a long wooden table outdoors in the dock.

There were a ton of people, a live band, and a cool ocean breeze blowing across the water, disrupted by the occasion sound of boats passing by. Amazing food and we had a great time just sitting there listening to the music for several hours before beginning the journey back to Boston. My dad had always wanted to have Maine lobster in Maine, so it was a check off the bucket list.

Our last day there, we visited a place I had always dreamed of seeing — Harvard University. 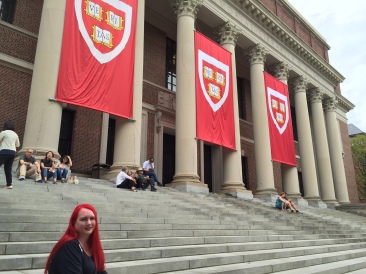 That is me sitting on the steps of one of my dream schools. (Still waiting on that acceptance letter —beginning to think it got lost along with my acceptance to Hogwarts) The tour was student-lead and the guide was very knowledgeable, revealing different points of history along the tour, including the buildings where a few award winners and a President (or two) had stayed.

We also, of course, went to the Hard Rock Cafe. I am a big pin collector. 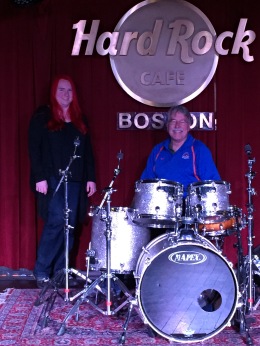 Overall, it was a great trip and I enjoyed by the conference and getting to see a part of the country where I had never traveled before.